Never ceases to amaze me how some people continue to think it is cute to allow their children to treat dogs this way....... 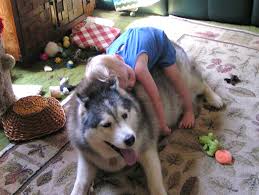 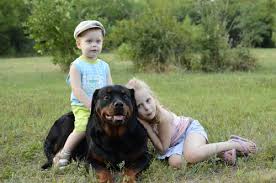 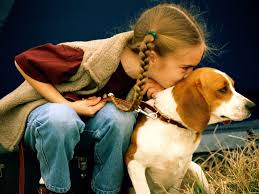 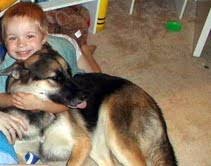 And in some cases praise the child for the behavior....... In any of these cases, if the dog reacted or moved in any way that hurt the child, we know who would have gotten punished and it wouldn't be the children.  Ok, my ire is caused in part by my brother's friend punishing his dog when it moved causing his infant daughter to fall off its back and bang her head, his reasoning was, "it's a dog, a dog should do what we want".

good point. real dog lovers should educate children and childish adults that in too many cases a kiss to the face is an insult to a dog. It is in our media all of the time, especially in national dog retail chain's advertisements. Common sense is now uncommon

I got Ranger as a 3 year old mature male. He'd rarely ever been off his tie-out, and had no manners or training, so I decided to take him to an obedience class.

After the class was over, I sat waiting to talk to the instructor while the next class brought their dogs in. Now, I believe this class was supposedly a class for problem dogs.

I heard the pitter-patter of feet behind me, but did not bother to turn around. Next thing I knew, a little toddler was throwing his arms around Ranger's neck! The little guy was about the same height as Ranger was when sitting down, so his face would have been at the same level as Ranger's jaws.

My previous GSD had not been good with kids, so my heart was in my mouth. Fortunately, Ranger showed no reaction, and actually seemed to like the attention.

A few seconds later, the boy's slightly older brother came along, and did EXACTLY the same thing! Then, a third boy followed, but he only patted my dog.

I was planning to rip a strip off the parents for allowing this, especially in a class of what was supposed to be 'problem' dogs, but unfortunately, the instructor arrived to talk to me at that moment, so I missed my chance.

NO WONDER so many kids get bitten!  I was around farm dogs from a very young age, and one of the first things I was taught was to treat a dog with respect, and not like a stuffed toy, especially if I did not know the dog!

I think this post could be very educational for people like myself who don't have a problem with this, if your dog is raised in your family.....

I really enjoy gleaning lots of information from this site and have learned a well-spring of knowledge because of all of you posters...there are a few things though, like this...that I don't understand why you would shake your head?

We have brought dogs in our home of all sizes, breeds and ages, and treat them all on their own individual bases....The dogs that I have no idea about their personality, you bet I keep my kids away from them in a control freak sort of way....however, the ones we raise from puppies as our own who become part of our pack, are cuddled with, wrestled with, climbed on...sometimes picked up and carried....and you know what...we have a terrior who LOVES to climb on our shepherds...sleeps on them longs ways, side ways, upside down, you name it (we like to call him a goat becasue he acts strangly like one! HA!), so it's not necessarily just a human thing to do...there are some pictures on here that I do think is TOO much! Like the kid standing on the dog! HA! That is awful, but the kids cuddling and loving their dogs? Why shake your head at this? Again....for me, I am ignorant on this, and allow my own children to this to OUR dogs...not to strange dogs by any means (however these photos look like these are these kids' dogs!)..but if this is their own dog why shake your head?

My husband had a female relative who used to grab me by the back of the head, wrap her arms tightly around my body, and jam my face into her ample bosum as her version of a hug. I felt so smothered and miserable that I used to find any reason to avoid attending family gatherings where she was present. Sweet little old lady or not, I wanted to punch her on sight. She was family but this behaviour crossed a personal boundary for me. I think of how I felt in this woman's forced embrace every time I see a photo of a child "cuddling" the family dog when the dog's body language clearly shows that he is feeling uncomfortable.

Right! You have a very vallid point HAHA! That would be awful! Especially if grabbed by the back of the neck!! :D

However, what if that person comming in to give you a hug was someone you have bonded with deeply? My kids and dogs have all been babies together, wrestled with, dug holes, looked for bugs, gone on hikes, swimming, used as a pillow when reading books... but for the sake of argument...

I'm just asking so that we all understand what you know....is this something that all dogs have issue with? Because when I look at those photos, the ones I would be concerned about is the Rotti...big eyes, MAYBE the shepherd with the ears back and licking....but could that just be "Honey, your grip is too tight!"...can be fixed!  Or can some dogs grow into a family, and understand that these behaviors and actions are not a dominant thing, but an endeering thing? ;)

Again, I'm asking from the standpoint of most people here....

Does anyone honestly think a kid's standing on a dog or riding it like a pony is the equvilent of the kid's giving the dog a hug? Why would  anyone allow a child to ride a dog or stand on it? What sort of message does that send to the kid?

"What sort of message does that send to the kid?"  The wrong one? lol.

That means you do not pull the dog's ears, do not ride him like a pony, do not pull his lips to make funny faces, no matter HOW cute you think it is.

And YES, many dogs have a problem with being hugged. If one dog wants to dominate another, it puts its head over the other dog's back to show 'I am bigger than you are'. If the dog does't want to be dominated, it may bite.  Unfortunately, that's about what a kid does when it hugs a dog. Also, it puts the kid's face in the direct path of a bite, if the dog doesn't want to be hugged.

I have a book called 'Childproofing Your Dog'. The # 1 rule is do not leave your kids unattended with your dog, no matter HOW well socialized you think it is. All dogs have their limits, and when those limits are reached, they WILL snap and bite. You also never know what stupid thing a kid is liable to try. I remember a story about a dog that bit a toddler. The family immediately took the dog off to the vet, and asked that it be euthanized. The vet decided to do a physical exam first. She found two crayons deep down in the dog's ear!!